More than 800 delegates enjoyed a day of debate and networking at indigO2 for the Thames Gateway Forum 2009. The evening drinks reception was a sell out and the site visits to Gateway locations to see investment and development opportunities were enjoyed by all who attended.
Full story

A large audience gathered in London's east end Toynbee Hall theatre space, Whitechapel, to see two films by "director extraordinaire" Ian Johnson. The first film to be shown was "Bruce Lacey: The Original Performance Artist" (56mins) a film documenting the work of 60's robotics and performance artist Bruce Lacey. Ian's second film "No Problem..." (33mins), was a tense documentary film about actor, writer and man of notorious and experimental theatre, Ken Campbell. Campbell, who died suddenly last year at the relatively young age of 66, was prolific in his creative output achieving notoriety in the '70's for some marathon stage productions - 'Illuminatus!" (9 hours) and Neil Oram's play 'The Warp' (22 hours)- listed by the Guiness Book of Records as the longest play in the world. Ian's "No Problem..." features the latter. Amidst the audience were some of the cast of this marathon - so a rare chance to hear some interesting comment about the life and work of Campbell.

Folk of all kinds gathered in and around Tenterden, Kent for the annual Folk Festival. Morris Dancers of all sorts, shapes and colours filled the streets alongside music, crafts, story telling and music workshops.

All Artists of the World united beneath a massive tent in Regents Park for the annual Frieze Art Fair featuring over 150 of the "most exciting contemporary art galleries in the world".

Meeting up with the Prizewinners

On Sunday, 10 August, we held a small social event where prize winners and members who participated in the task of "judging" got together for 'afternoon tea' at AND Association's "EventSpace" in Whitechapel.
Full story. 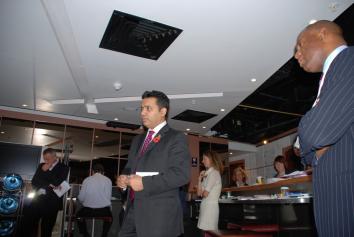