An invitation to take part in RCA Society’s “Sensory City” 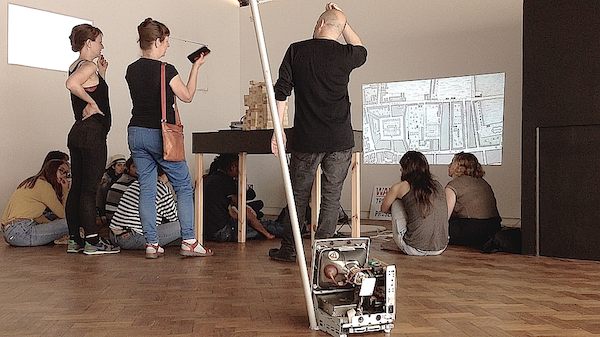 “The London Festival of Architecture is Europe's biggest (and best!) annual architecture event, and we want as many people and organisations as possible to get involved and celebrate the brilliance of London and its architecture.”

The RCA Society is taking part in the London Festival of Architecture 2018 with a month-long event through our specific theme of the “Sensory City”. In partnership with AND Association we will be using AND EventSpace throughout June for discussion, display and installation.

Organised by RCA Society with AND Association

Opening times for viewing and contributions: Wednesday to Sunday 1pm - 7pm. Roundtable discussions will take place on Saturdays and Sundays.

Place • This year we are again using AND EventSpace, in east London. The venue has two contrasting spaces within a railway viaduct, where  participants’ and visitors’ contributions can be assembled.

1) The ‘gallery’ area has floor space and wall space to accommodate 2D or 3D items and objects.

3) Linking the two spaces is a courtyard

Following the London Festival of Architecture organiser’s announcement of this years’ theme the RCA Society submitted our proposal for ‘Sensory City’. A concept of ‘Sensory City’ was developed from our members’ contributions.

See the text and information on the following weblink.

Who can participate -“Sensory City” will be open to those who have direct experience of living or working in or visiting London. Participants can be from any walk of life or profession, and not limited to architects, planners and engineers, who can come and go, bring and take away their contributions or add new items throughout the month.

Visitors’ and participants’ observations and contributions, which enhance our understanding of London as a “Sensory City”, can be displayed in the ‘gallery’ space.

Objects such as; maquettes, items, constructions, drawings, sketches, texts, plans, written ideas / proposals, materials will be positioned and displayed in the ‘gallery’.

Digital contributions such as; digital images / photos, drawings, video clips, sound clips, lights, will be projected or played in the second space which is a subdued / dark environment.

Participation • Throughout June the AND EventSpace venue will be open to receive, display and view your observations and contributions.

Programme • From 1 June participating artists, architects and visitors’ place their contributions in AND EventSpace

Post event • At the end of June the contributed works, items, displays will be documented and put aside to be collected by the participating contributors.

within a specified time.

The shifting shape of London

From it’s early beginnings London’s identity as a remote coastline port on a large river thirty-five (35) miles inland from the sea has changed. Invading tribes and countries built secure settlements for their armies at a point in the river where it could be crossed without too much difficulty but was wide enough to be protective. Settlements grew, on the south side then expanded northwards, cultures came and went. Natural and man made disasters shaped what was to become a country’s capital city: the invading armies and ruling systems of the Romans, Saxons, Vikings and Normans, changed London’s layout along with great fires and plagues, a frozen Thames, fog - ‘pea soupers’, and more wars influenced the changing use of materials, ways of building and structures that reflect evolving social and political infrastructure. The web of roads extending out from London holds it in place and shapes it even further. Contemporary life style and economic shifts are altering London’s identity at a rapid pace. Structurally it’s remains a divided circular city of many centres, a layered city with many stylistic expressions that it’s constant identity is that of a hybrid… a ‘familiar’ place for everyone because it borrows from everything. It could be anywhere in the world yet it’s identifiably London.

What makes this so? The weather, the collision of seasons, the language of the rambling streets, the cracked grey pavements, green patches, the red buses, the yellow bricks, the slate roofs, the low level horizon of a mish-mash of buildings punctuated by hi-rise incompatibles, the passage of the sun, east to west, along the length of a river the colour of cold tea, the unnoticeable rise of land out from an imperceptible valley punctuated by the incessant sound of mass commuting, the roar of airplanes, the clatter of commerce, and the opening and closing of opportunities…

London - a transformer city of constantly shifting identities. Is that how you see it?

Photofits of London: (influences from and comparisons to other [world / national] cities) as the water of the Thames itself is drawn from all around the world… the dust and sands blown in from North African deserts… the airbourne pollen from far away plants…  the debris from distant volcanic explosions… the materials extracted from the world’s mines and mountains… A series of interchangeable (visual) (sonic) templates of separate identifying (‘facial’) (sound) features

A layering of London’s visuality… to reflect its ‘borrower’ history of constantly shifting identities… which gives it a ’familiarity’.

Surveying of specific areas: documenting and layering of the images - (colours, materials, shapes - identifying their roots, and cultural histories to show the shifting influence of cultures - hierarchical sets, absorptions and rejections)

The Thames runs through London and slowy transforms from a salty sea water tidal river to a freshwater river at Teddington, 95 miles from the sea, and continues a further 200 miles to its disputed source in the west of England (Gloucestershire?). Its depth and width has altered, and the temperature, water and river life has ebbed and flowed over the centuries.

We look forward to your participation, contributions and visit to ‘Sensory City’ 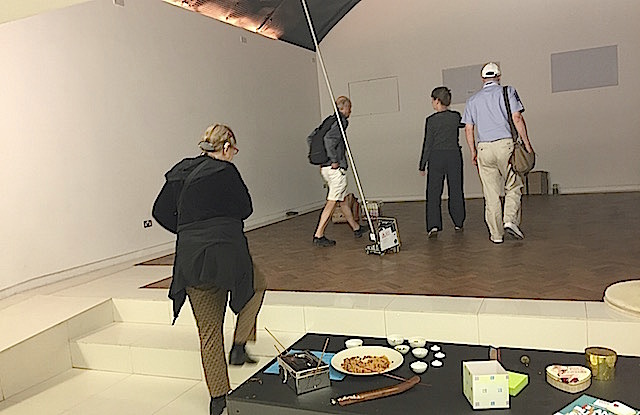 The city of London has a number of points in common with Paris. But they are both very different.

The atmosphere of a city
When we had a walk in town, we noticed that the atmosphere between Paris and London was different. Paris is invited us to the loneliness : the population do not discuss between them. Thanks to the architecture, London releases a feeling of well-being. The population is welcoming and we feel that it is important for them to exchange, to discuss and to share things.

The architecture
We visited the neighborhood of '' Notting Hill ''. The latter showed white Hollywood facades. Nevertheless, going further into the neighborhood we could see small colorful houses, with gardens in front. This difference in the same neighborhood shows the cultural diversity of the city. We do not find that in Paris.
In Paris the buildings are higher, we have the example of the Montparnasse tower. In the city of London buildings are also more distant from each other. This makes it possible not to feel suffocated as one could be in Paris

Nature in the city
Unlike Paris, London has a very present vegetation. There are parks, trees, flowerbeds ... It gives the city the feeling that you can breathe easily and it gives less the impression that we are in a big city.

London, a clean city
The first thing that struck me in London was the cleanliness of some London neighborhoods. The station where we arrived had very little waste, we all noticed. There are fewer garbage cans but also less garbage in general in London. While in Paris, many bins are installed everywhere but there is also much more trash.

The layout of the city
In the development of the city, people with disabilities can be taken into account. Indeed, I noticed that all pedestrian crossings had signal equipment for blind people. In addition, the city seems more accessible for people with reduced mobility such as the metro which is equipped with many lifts and is wide enough to let people in wheelchairs.
However, the city's politics seem more difficult with people in street situations. Indeed, I could see many benches with an armrest in the middle. I consider it a way of preventing homeless people from sleeping on these sites.
The pedestrian crossings are also very respected by the cars, indeed in France it is necessary, to engage on the road in order to be able to pass, while in London it is not the case.

Districts
London has the distinction of operating in a neighborhood. These are of great importance for the citizens. French neighborhoods are not so divided and distinguished by identity. Paris and perhaps the exception because it’s also divided into neighborhoods.

Communities
The communities in the city of London are very strongly represented. Indeed, during the visit of the Brixton district, we could see the cohabitation of several communities.
We also find the example of a mixture of cultures in the neighborhood of '' Notting hill '', after talking with a trader we understood that people lived and rub shoulders every day in the same neighborhood. (The trader was Italian and explained to us that the communities are grouped according to their membership and not according to their place of life.)

StrongPeople's attitudes
The people we met in London were all very kind. When we had a problem, we could easily asked for help. In Paris, people are much more individual. It becomes complicated to ask for information.

An intercultural city
London has also many places of worship. Some of my comrades have seen places for different religions placed near each other, such as Notting Hill. In addition, we made this trip in the middle of Ramadan, we were all surprisingly surprised by the advertising posters dedicated to Muslims for this sacred period. The city of London looks more open regarding the visibility of objects with religious connotations unlike Paris, which has, at first, fewer places of worship, but also where all signs of belonging to a religion can bring some constraint.

Overall, the city of London seems more open and more social oriented. Indeed, I had the impression to see more associations and alternative places than I did in Paris.