London is enjoying two major exhibitions of work by two popular and influential artists - Eduardo Paolozzi at the Whitechapel and David Hockney at Tate Britain. Both artists, at either end of the same generation, had a connection with the RCA and both are linked to 'pop art'. Each one has held the accolade of 'father of Pop Art'.

Hockney studied painting at the College 1959-62 and discovered 'pop art', the USA and 'sun bleached' hair whilst a student. Paolozzi began teaching in the Ceramics Department in 1968 having already established himself as both an artist and designer. Hockney on his return to the RCA in 1962 from 'time out' in the USA, failed to achieve the College's ARCA award for not having submitted a written thesis. Though the letters were eventually awarded to him on the strength of his paintings. Paolozzi, who was never a student at the College, was awarded an honorary doctorate by the RCA in 1979. Both artists enjoy several acronymized accolades and national recognitions through CBE's, RA's, OM's and CH's.

The two artists' exhibitions; simply named "David Hockney" and "Eduardo Paolozzi", show the historic period when new world 'pop' levered open the cracks of the 'european' schools of impressionism and surrealism. Though (the elder) Paolozzi's work was more akin to the european futurists (Boccioni, Marrinetti) and surrealists such as de Chirico (artists and styles which may reflect his empathy with an italian heritage?), Hockney's work was very much in the style of the fresh faced kid from the provinces looking towards the brave 'new world'. Both artists, although almost a generation apart, reflect the predominating commercialisation and 'automisation' of a post war economy. They both reference a new synthetic age being built up by the Marshal Plan and a Coca Cola economy. Paolozzi's soft shoe'ing between heavy industrial 'darkness' of automatons churning out bright new '57 varieties' of light stuff is in contrast to Hockney's lightness of touch and playful indulgence in the material rewards of "american dreaming". However, both artists, regardless of the US economic and political domination of the Post War era and since remain very 'British' in their output.

The Paolozzi exhibition at the Whitechapel is a solidly comprehensive retrospective showing a wide range of output: exhibits included samples of printed textiles and cocktail dresses made for exclusive haute couture fashion houses alongside a number of publicly commissioned large bronze mechanical casts, as well as decorative screen prints to massive techni-coloured murals (most notably for Tottenham Court Road Underground - currently being reinstalled along the platform areas of the newly refurbished station). His work oscillates between the fine and applied arts which reflected his appointment to teach at the RCA in the Ceramics department (then headed by Lord Queensbury) rather than in Fine Art. This purposeful blurring and breaking down of 'disciplines', and de-categorising of practice is what makes Paolozzi's work so notable and a precursor of cross disciplinary practice which grew out from the 1960's onwards. Though they both inhabited the same post war world of mass production and the rise of capitalism Paolozzi, in appearance and style, was an almost 'opposite' of Hockney. Hockney was the cool iconic 'pop' artist whose work was structurally traditional using a technique of 'cool graphic'. Paolozzi was the dark, stocky mechanic in control of the machine which produced the shiny pop product. The subject matter of Hockney's paintings were visually 'fashionable' yet his references were the classic 'European' masters (Picasso, Matisse, Cezanne). Paolozzi referenced a sci-fi future stamped out by machines.

The works of both artists have enjoyed a lot of exposure. Commuters and tourists are quietly familiar with Paolozzi's public domain sculptures as they run through the veins of London from the Design Museum in Kensington, to the Strand, the British Library (Kings Cross) and on to the riversides of east Docklands. Whereas Hockney's rural landscapes are firmly planted indoors in public museums and galleries - and soon within Westminster Abbey. His current show at the Tate follows close on the heals of the impressive Royal Academy Show 'The bigger Picture', and includes many of his new 'iPad' generated' works which, undoubtedly, will firmly embed him into the hearts and minds of a new generation of followers. 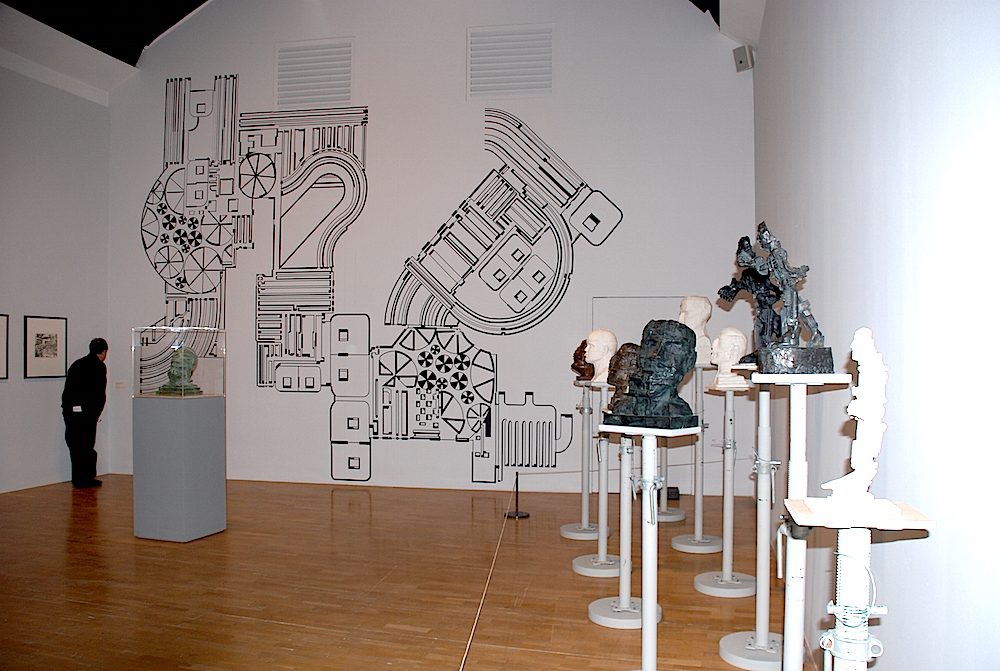 Paolozzi's exhibition at the Whitechapel shows the diversity of his work