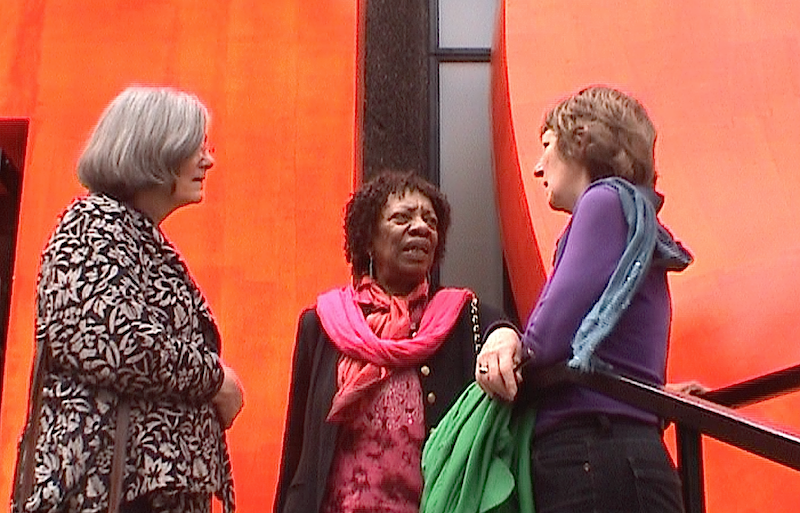 I first met Althea McNish in the mid 1960’s when I was a ‘Fashion’ student at Hornsey College of Art. Althea was a (new) lecturer in the Printed Textiles Department - one of a dynamic group of lecturers in the Department who had graduated from the RCA. Her appointment preceded a generation of young lecturers (mostly RCA graduates) brought into Hornsey's Fashion & Textile departments during the 1960s: Natalie Gibson, Anna Potwiejoska, Paul Babb, Sylvie Ayton, Pam Proctor, Brian Godbold, Brian Harris… Julian and Renee Robinson. But Althea was a unique breath of fresh air - hugely colourful in herself as well as in the textile design style she encouraged - Her noisiness was a relief from the ‘cool’ academic style of ‘artschool teaching’ of that time. Thirty years later I met up with her again - she was still as vibrantly friendly as she was in the 1960s. We would sometimes bump into each other at the College degree shows where she would seek out textile students to award her ‘Prize for Colour’… This generous annual prize was Althea’s personal contribution to a new generation of textile designers who were about to embark on a profession in an industry on the edge of decline in the UK… It was her way of encouraging a textile renaissance - to revive an important industry… and to build on and celebrate the art and design produced by African and African-Caribbean graduates. Her supportive connection with the student body at the College was enduring. She was a longstanding member of the RCA Society, alongside Prof Audrey Levy, Zandra Rhodes, Dorothy Baraclough, who, around 1980, revived OSARCA (the Old Students Association of the RCA) as the ‘RCA Society’. Althea was fittingly acknowledged for her pioneering work in Textile Design and Art Education and was awarded the Chaconia Gold Medal from the Republic of Trinidad and Tobago (1976) followed by an Honorary Doctorate from the University of Trinidad and Tobago (2006) - both of which made her hugely proud. At one time, unusually outside of RCA Society activities, I bumped into Althea and John in the Ikea store in Edmonton. Soon after, when I visited her at home nearby in 'Seven Sisters'  she mentioned she was trying to get all her designs collated and organised into an archive. It’s at times like this we realise that so much wonderful work produced by so many artists and designers simply disappears… and so often wonder what can be done to bring all these works and their history into public view ?
Her death was preceded in 2018 by her long time partner, architect and designer John Weiss.

It would be good to hear what you think would help to uncover artists and designers 'hidden' contributions to Art & Design Culture.